Press / Arts and Creative Industries / Bidding for a better future 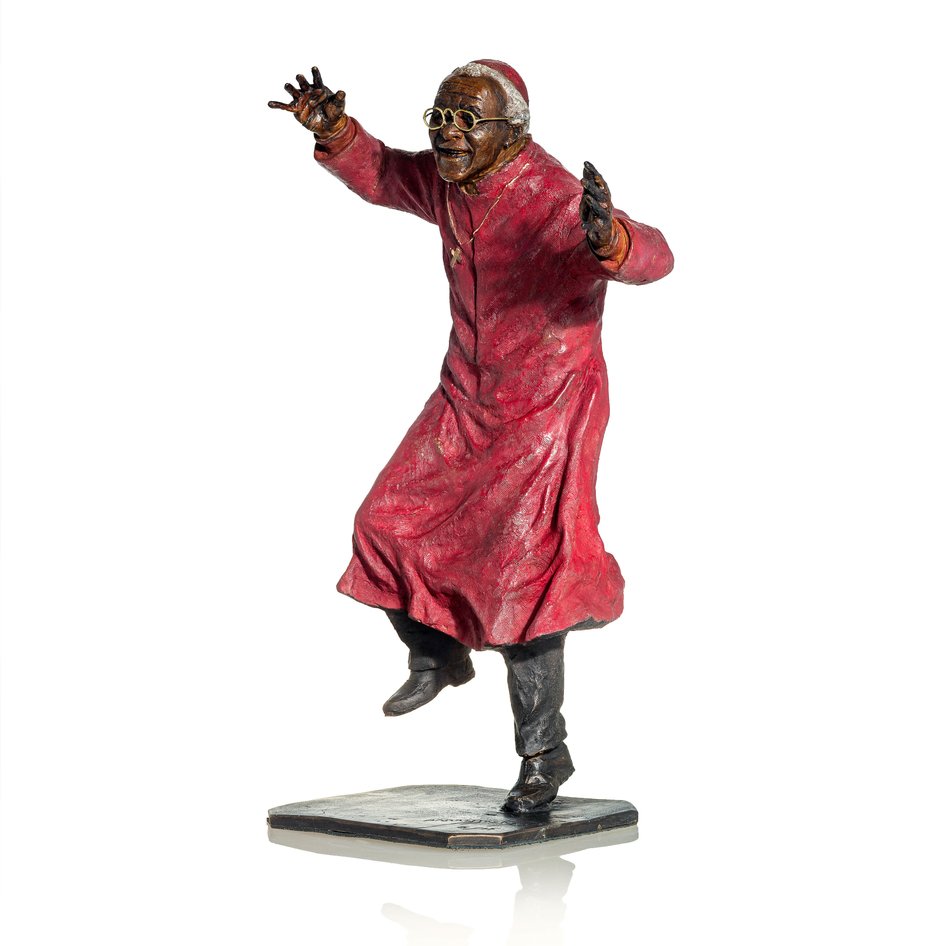 Art collectors, wine lovers, and people in search of once-in-a-lifetime experiences, can start bidding on a catalogue of items and experiences that will go under the hammer to raise funds for the Tutu Legacy Fund.

The auction, set to take place on 22 September 2021, is part of the Foundation’s 90@90 campaign. The campaign, which began in 2020, aims to raise R90-million over two years for the Tutu Legacy Fund in Archbishop Emeritus Desmond Tutu’s 90th year, ending on 7 October 2022.

The Tutu Legacy Fund was established to help facilitate the Foundation’s ability to foster a new, inter-generational drive for positive change in Africa and the rest of the world, thereby ensuring that the Archbishop’s legacy of ethical leadership is perpetuated.

“Archbishop Tutu’s principled and courageous leadership gave South Africans hope and courage during apartheid, and it gives us hope and courage today. His example is sorely needed at this complex time in human history,” said Piyushi Kotecha, CEO of the Desmond & Leah Tutu Legacy Foundation.

Funds raised from the Art for the Arch auction on 22 September 2021 will go towards an exciting new long-term exhibition celebrating the work of Archbishop Tutu, titled Truth to Power, curated in collaboration with the Apartheid Museum, which will open in October 2021. This exhibition forms part of the wider 90@90 campaign.

The hybrid (in-person and online) auction event will comprise two sessions, the first at 3pm, with the main event taking place at 6pm.

From a breakfast with former Public Protector Thuli Madonsela and Anglican Archbishop Thabo Makgoba to a print of photographer Jürgen Schadeberg’s famous photograph of Nelson Mandela in his Robben Island cell, this auction has something to offer everyone.

“It’s wonderful to be able to offer such a wide variety of lots in this exceptional auction, and we are honoured to be involved, and we are very grateful to the artists who have donated artworks to the auction,” says Frank Kilbourn, executive chairperson of specialist art dealers Strauss & Co.

Works by renowned artists, such as a new, limited-edition print by William Kentridge are on auction. Roses in Big Glass (2020) is one of a print series of 30 that has an estimated price tag of R100 000 to R150 000. Kentridge is an acclaimed international artist whose work – ranging from etchings to stop-frame video animations – often explores the effects of colonialism on the oppressed.

Cape Town-based artist Barry Jackson’s bronze Dancing Tutu statue will go under the hammer along with Esther Mahlangu’s Ndebele Abstract. Jackson is regularly commissioned to produce full-figure portrait statues of historical figures and has sculpted Nelson Mandela, Ahmed Kathrada, Oliver Tambo and Louis van Mauritius, a slave in the former Cape Colony who led a rebellion in 1808. Mahlangu is one of South Africa’s most globally recognised artists, whose brightly coloured abstracts explore her Ndebele heritage.

Archbishop Tutu also features in a painting by artist Charles Foley, who was part of a South African team that won the Cannes Lions Grand Prix award. The oil-on-canvas work, titled The Spirit of Joy: Tutu and Dalai Lama (2021), depicts the two spiritual leaders’ famous discussions on joy at the Dalai Lama’s residence in Dharamsala, India, in 2015.

Art lovers looking for something unusual to bid on might earmark Turiya Magadlela’s Ubuhle bakho bufana neLanga (Your Beauty Is Like a Rising Sun). This piece (pantyhose on canvas with acrylic gel sealer) was created in 2018, and is expected to fetch between R80 000 and R120 000.

Other works on auction include Blessing Ngobeni’s Died Digging Gold 1, which has an estimated value of R80 000 to R120 000, Georgina Gratrix’s Ballyhoo Blooms, a colourful piece in oil and glitter on linen, and John Meyer’s landscape, West of Sutherland. Also in the catalogue are Lutanda Zema Luzamba’s Munkoyo, a portrait, and Jake Aikman’s Solace.

These are only a few of more than 100 artworks on auction,that have been donated to the Art for the Arch auction.

“I would like to profusely thank all the artists and other donors who have so willingly offered lots to be auctioned off. You are contributing to the Foundation’s vision for a brighter future for humanity, a worthy cause, ” added Kotecha.

Kotcheka also thanked the Foundation’s auction partner Strauss & Co. “The support they have given has simply been wonderful and a boon in this onerous and fulfilling journey. Our gratitude to them is enormous.”

Special thanks go to Dr Paul Bayliss, senior specialist art curator at the Absa Art Gallery, for assisting with the curation, and to the Embassy of France in South Africa and French Institute of South Africa for marketing the auction to its stakeholders.

Founded in 2013, the Desmond & Leah Tutu Legacy Foundation represents one of the world’s most iconic leaders, and his life-long partner. The Foundation strives to ensure their

uncompromised bravery is celebrated, communicated and curated for posterity. Guided by the

values of its founders, the Foundation uses the Tutus’ rich archival heritage to promote learning,

leadership and dialogue. This takes place through research and development, archival

digitisation, museum design and curation, and programmes and events to promote these